skip to main | skip to sidebar

.
Well, I had pretty big plans for making prints available for sale, but looks like that's not going to happen right now.
But I do have the supplies and the capability to make art cards - ACEOs - those little 2.5" x 3.5" cards on bristol paper.
I'll probably limit the number, and am thinking about hand-coloring a portion of the run, probably in colored pencil.
Looks like I left it pretty late to have these intended as Christmas presents - it's only a few days until the "mail before" day!
I'll post again when I get it worked out, but if you're interested, feel free to email me at pterelas at gmail dot com.
.
Posted by Nicole MacP at 11:30 PM 4 comments: 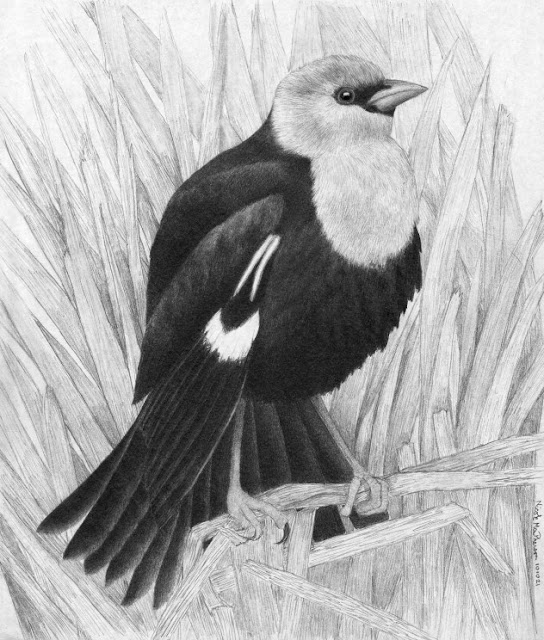 Yellow-Headed Blackbird - Graphite on Paper
Copyright 2010, Nicole MacPherson
Yellow-Headed Blackbirds are impressive looking birds!  They are lousy songsters though!  But the males put on wonderful displays, easily compensating for any musical shortcomings.  I've found them to be harder to photograph than the Red-Winged Blackbirds.  Less common in general, and a bit more suspicious of humans.  The Yellows are also more social, often foraging in groups.
This was my first attempt at a real background.  I found it harder than I expected.  Birds are fun to draw, grass and reeds are not!
As I've mentioned on this blog before, I don't use different kinds of pencils.  But I think I might have to change that.  Had to go over some parts a LOT to get them dark enough.  This ended up warping the paper.  It was even visible when scanned, and the paper underneath this one has a big, bird-shaped impression on it!  Finished this guy up on the 21st, but he's been sitting beneath heavy stuff since that time, trying to get the paper to flatten!
.
Posted by Nicole MacP at 5:56 PM 14 comments: 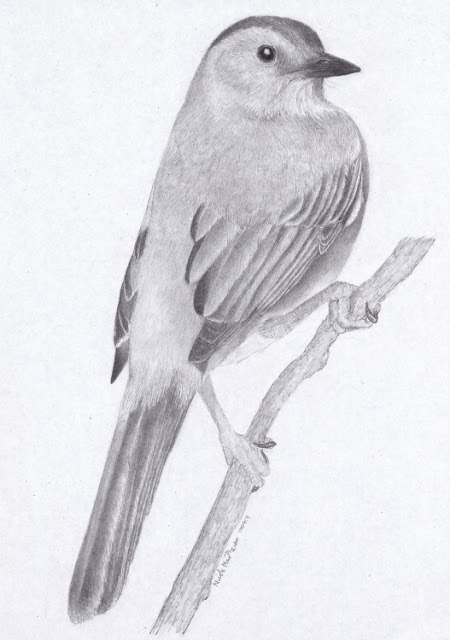 Gray Catbird - Graphite on Paper
Copyright 2010, Nicole MacPherson
The first and only Catbird I've seen was in my yard.  I love it when a life bird is also a yard bird!
He (?) actually hung around for three days last May, and was most impressed by the oranges we had put out for the orioles.  Sad to say, this year was catbird-less.  Actually, it was also oriole-less.  We had a very early, very warm spring, so maybe they had plenty of natural food and didn't need to lower themselves to handout from needy humans!
Only two weeks since the last drawing!  Wonder how many more I need before I can call it bein' on a roll!
.
Posted by Nicole MacP at 4:10 AM 10 comments:

This is cool, check it out!

.
I always enjoy looking at the work of other artists.  Sometimes it gives me ideas, and sometimes it's just awe inspiring.  I'm attracted to a lot of different types of art, even though the art I do has a much narrower focus.
Elza Kolesnikova is a watercolor artist, painting landscapes on glass. They're quite beautifully done!
.
Posted by Nicole MacP at 11:34 PM No comments: 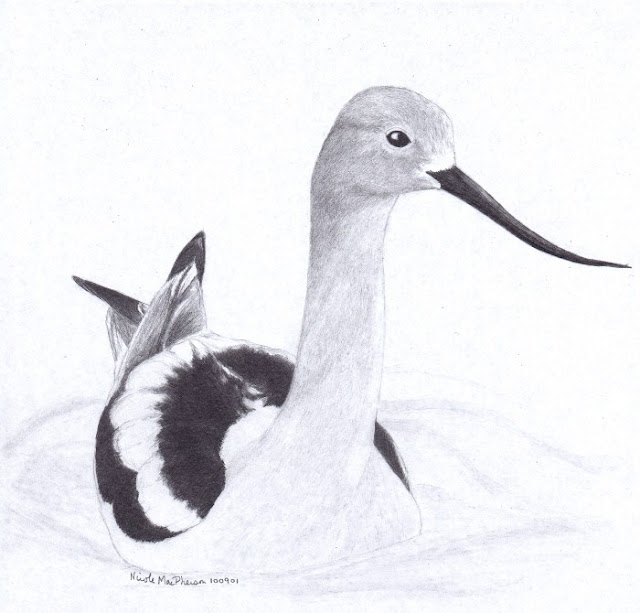 American Avocet - Graphite on Paper
Copyright 2010, Nicole MacPherson
Well, it's sure been a long time coming!
He looks a bit fuzzy-edged, truth be told, he's been sitting on my desk for some six weeks, begging and pleading to be finished!  Not entirely sure if it's a he.  American Avocet males have straighter bills than females, but it's not always easy to judge on a single bird!
Avocets are so beautiful, and often fairly confiding - they seem to have a much smaller zone of comfort.  This, combined with their larger size, makes them fun to photograph!  I love Avocets.  Ed calls 'em Flamingos.
Next step?  Learn to draw water!
.
Posted by Nicole MacP at 12:57 PM 6 comments:

.
Well, this is surprising!  I painted something!
Yes, it is a shock to me...  I haven't done a flat painting in years.  I used to paint model horses, but hadn't even done any of that in at least a year.  I got a beginners kit of Gouache paints a few months ago, but was too chicken to try them out.  On a whim the other day, I printed off a copy of my Baltimore Oriole, and proceeded to paint on it.  This is the result.  I started with the orange breast, and ended up with a more "abstract" look than I expected, but I find I rather like it!
I'm not sure what this would be considered, the drawing was originally mine, but I painted over a copy of it, but whatever it's to be called, it was FUN! 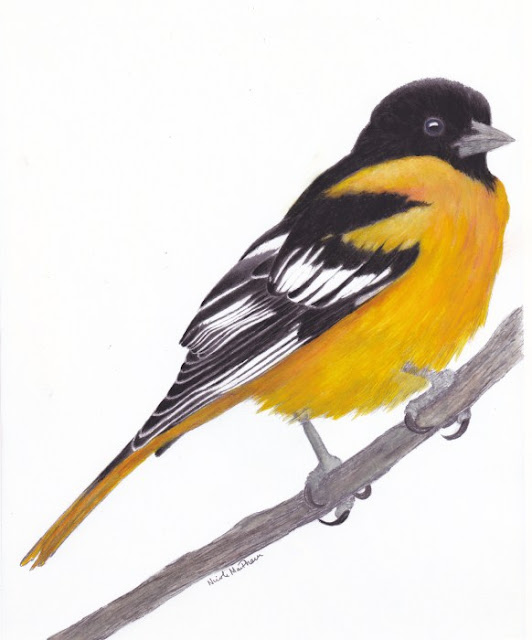 .
Well, not quite sure how it happened, but I managed to coax a bird off of the paper yesterday! 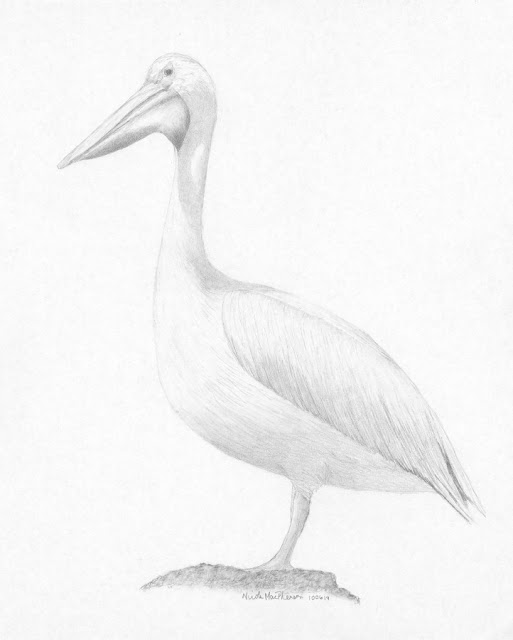 American White Pelican - Graphite on Paper
Copyright 2010, Nicole MacPherson
The American White Pelican is hard to miss, and quite conspicuous in this area from spring to fall.  We live in the middle of the city, but have Pelicans on our yard list - returning from a trip a couple of years back, a group of them flew overhead while we were unloading the car.  How cool is that?  They are often tolerant of a human presence, and are fun to photograph!  They make the funniest faces...  I spied this individual at Whitemouth Falls, one of a large group (maybe about 30) in June of 2006.
I didn't have a clear enough photo to do a really detailed drawing, this is more of a sketch.  I was thinking about the oil spill while I was drawing, and had trouble with the shadows on this bird.  Maybe it was the oil on my mind, but my bird seemed more "dirty" than white.
For some reason, I had assumed the oiled birds I'd seen pictures of were all Brown Pelicans.  Not sure why I thought that, it's not like the identifying features were visible.
Took a quick trip to the Cornell Lab of Ornithology Bird Blog to see what they had to say.  They mention that the photos making the rounds online of birds "mired in oil" are Brown Pelicans, but the first bird in the slideshow is an American White Pelican with a good deal of oil on its feathers.
In my reference photo, the pelican was resting, and probably had his head cocked that way to keep an eye on the water, in case any juicy fishies swam up.  But in my drawing, he looks to be casting a jaundiced eye to the viewer.  But maybe that's just me.
.
Posted by Nicole MacP at 10:04 PM 2 comments:

.
Yes, I'm posting this to my art blog and my nature blog!  If you haven't already, please check out the gorgeous images collected on The Conversation Report's blog in honor of earth day. 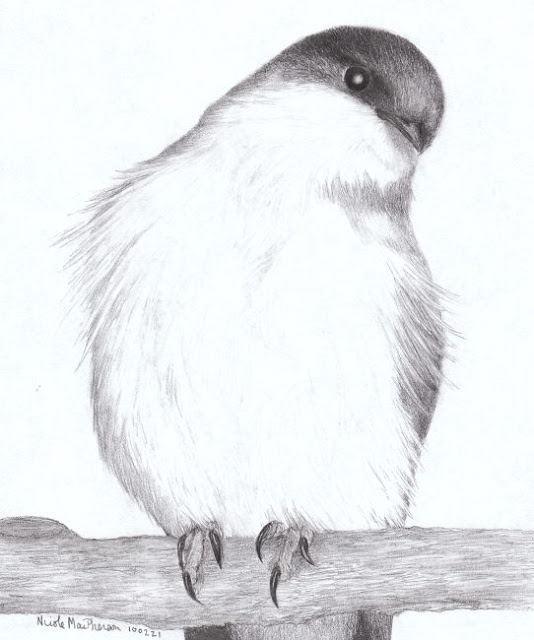 Tree Swallow (Detail) - Graphite on Paper
Copyright 2010, Nicole MacPherson
Still more blue haze on the scan, sorry about that!  I think I need to learn how to photograph these drawings, instead of leaving them to the mercy of the scanning software!  I actually did a full-body drawing of this bird, but in resizing the image fit on a computer screen, alot of the detail was lost.  Therefor, I offer you two versions of this drawing, the full image is at the end of this post.
Tree Swallows have charm in abundance.  Even when they're not doing anything, they look cute.  Through the spring and summer, most of the Tree Swallows you see are a beautiful iridescent blue.  In the fall, most of them are a soft brown.  It can be hard to tell them from the two "brown-all-the-time" Swallows, the Northern Rough-Winged and the Bank Swallows.  But brown Tree Swallows have a sharply defined transition from the colored head to the white chin (presented nicely by our model, above) and no brown across the chest.
Tree Swallows can also break your heart.  In some places, they congregate in the hundreds, or even thousands.  Usually around marshes, but sometimes on powerlines and roads, where some are inevitably killed by cars.  But instead of leaving the source of danger and abandoning their lost loved ones, some of the Swallows will stay alongside their fallen friends, even as traffic continues. 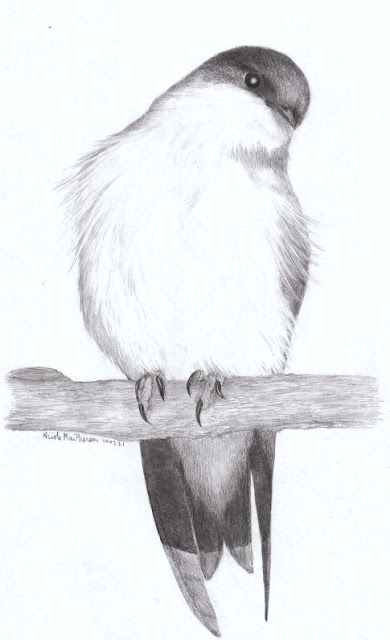 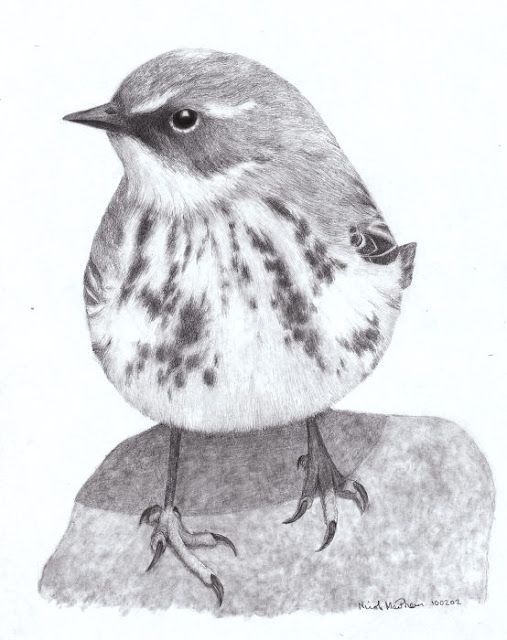 Wow, what a long time between drawings!  I actually started and abandoned four drawings between the Nazca Booby and this warbler.  Not sure why they didn't work, maybe I'll go back to them.  Or maybe not!
Yellow-Rumped Warblers are usually one of the first warblers to return in the spring, and usually the last to leave in the fall.  Warblers don't generally over-winter, but most over-wintering warblers are Yellow-Rumped. The other great thing about them is that they use birdfeeders!  I've had them eating sunflower seeds and suet.  And water brings them in like nobody's business!
When I scan these drawings in, I try to adjust the scanners settings so the image on my screen matches the actual drawings level of "darkness".  I don't know why the default settings make it show up so light - when I use the same setting for photos and drawings, you can barely see the drawing at all.  And then when it's the right level of "dark", the background turns blue!  Oh well, technical difficulties notwithstanding, it's nice to have another drawing completed.  Here's hoping the next one doesn't take six weeks as well!
.
.
Posted by Nicole MacP at 9:56 PM 2 comments:

Well, we may have officially crossed over into Monday, but it's still Sunday night to me!
Just a random sunset picture.  I can never resist photographing sunsets, each one seems completely different to me!  I must have thousands of pictures of 'em. 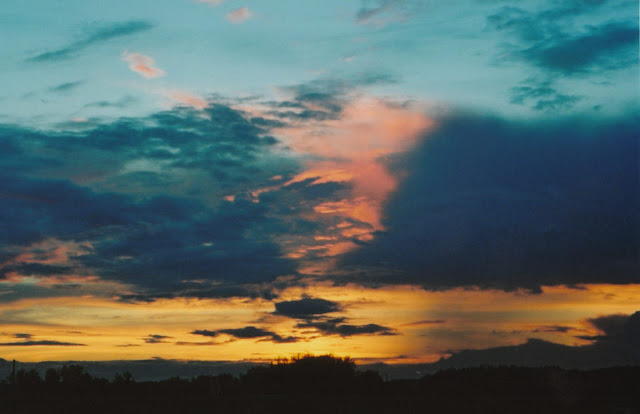 Photographed in June of 2005, no idea where.  Someplace, Manitoba.
Posted by Nicole MacP at 12:09 AM No comments:

Still no new drawing, but there's progress!  In the meantime, have a flower or a hundred...  I think these are begonias, photo taken at Assiniboine Park in Winnipeg. 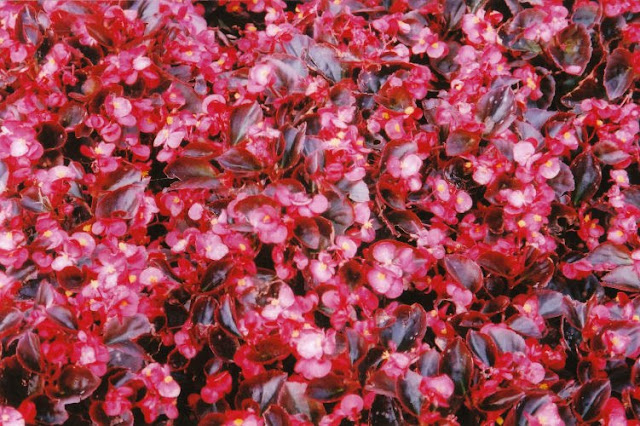 We'll call this a vacation

I love new projects.  Nothing to do with the new year, I start them any time of year!  Check out my nature blog for my latest project - scanning in all of my analog photos (prints from film cameras).  I'm guessing I've got somewhere between 10 and 15 thousand...  Hoping to be done by spring!

Here is a photo taken at Hecla-Grindstone Provincial Park, in May of 2005.  (Click to enlarge) 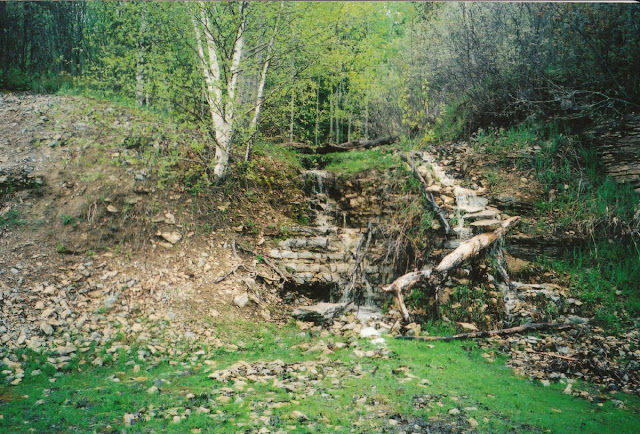 Posted by Nicole MacP at 1:37 AM No comments: